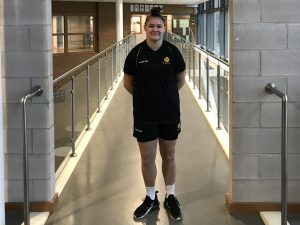 Having grown up in Daventry, The Parker Academy student Katie has been playing rugby for eight years and is now coaching Year 7 and Year 8 pupils at a local rugby club. Katie has also recently been offered a rugby scholarship with Saracens rugby at Oakland College. We caught up with her to find out more, including advice she would give E-ACT pupils aspiring to do something similar.

Congratulations on your scholarship! When do you start and what does the scholarship involve?

My scholarship starts in September 2021 and involves completing a two-year diploma in Sport Coaching & Development. I’ll be working with the Saracens Senior Women’s Rugby team and my lessons will be fitted around playing and training. My scholarship will also allow me full access to the staff and coaches at Saracens, including their training pitches, dieticians, physiotherapists and strengthening & conditioning coaches. I’ll be moving away from home, as Saracens is based in St Albans.

When did you first get into rugby?

Was there anything in particular that inspired you to get into rugby?

Everyone in my family is into rugby, so I grew up with it. My dad also used to play for Daventry, so that’s where it all started. For me, rugby started as a social sport but I became more serious about it as I got older.

How much did COVID-19 impact your ability to play rugby over the last year?

I haven’t played a rugby game since March 2020. The pandemic halted everything from my East Midlands trials being cancelled to the National Cup final also being cancelled.

How has The Parker Academy supported you with your rugby journey? Are there any teachers in particular that had an impact on you?

My academy has really helped me with getting the grades I need to get my scholarship. For example, teachers moved me into the relevant class sets to help me get there. Whenever I had a rugby tournament, the academy allowed me to have time off too.

My Head of Year, Miss Townsend, really pushed me to get good grades, and whenever I was anxious about my exams, she helped to keep me calm.

What are your career aspirations within rugby?

I want to play rugby professionally for England. Depending on what grades I get during my rugby scholarship, I could also go to university afterwards. If that did happen, Loughborough University would be my first choice, as they’re renowned for sport.

Do you have any advice for E-ACT pupils who may want to get a rugby scholarship?

Two seasons ago I encountered a lot of setbacks. I broke my leg, went to hospital and was out of rugby for 12 weeks, which inevitably made me want to give up. However, my advice would be to keep going, despite it being hard. Stay focused and dedicated in your lessons, no matter how difficult it gets.

Before I was offered the Saracens scholarship, I applied to eight different colleges. I had numerous college application forms, phone calls and interviews and it was stressful. But when I got the offer, I was dancing around my kitchen!

What position do you play and why do you enjoy it?

I play number eight which is at the back of the scrum. I enjoy this position because it’s one of the most important players in the game and gets involved in everything.

Do you have any advice for girls wanting to get into rugby?

Don’t hesitate about joining a rugby club, as I didn’t think I would like it but now I love it! I’ve tried to get my friends involved in rugby over the years, but they don’t think it’s a sport for them because rugby is typically seen as a ‘boy’s sport’. However, women’s rugby is very different – you make new friends, new memories and you learn respect for other people and plenty of life skills.

Which rugby team do you support?

I support Northampton Saints rugby team. I like to stay loyal to my local area.

We wish Katie all the best with her scholarship later this year and look forward to following her rugby career!

RT @proexcel: Who can believe it's been two weeks since event day at @SilverstoneUK? We just want to say a special thank you to everyone w…