We use cookies on this site to improve your user experience 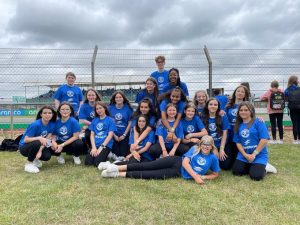 On Saturday 2 July, a selection of pupils from E-ACT Parker Academy, E-ACT Crest Academy, E-ACT Bourne End Academy, and E-ACT DSLV Academy performed a dance routine at Silverstone at the British Grand Prix. Working with Pro-Excel dance, our students had a once in a lifetime experience performing at one of the UK’s biggest sporting events, alongside musical acts such as Bastille and Sigala!

They were joined by 1,700 students from schools, studios and performance teams across the country, making this the biggest mass-movement dance production in Silverstone & Pro-Excel history. Our students opened the dance routine by conducting a parade on the important topic of climate change.

We are incredibly proud of our students who performed a dance routine at Silverstone on Saturday 2 July!
They were joined by 1,700 students from schools, studios and performance teams across the country! #Silverstone https://t.co/Q4j058eYGg

“What an amazing day at Silverstone. Thousands of fans watched our students start the performance with a parade showcasing powerful climate change messages.”

📢Year 7 Open Evening At our open event you can meet our teaching staff and tour our fantastic facilities. Join us! 🗓️Thursday 22nd September 2022 ⏰5.30pm - 8.30pm Book your place: https://t.co/mbqP2ItLpA https://t.co/4uupsg6Lq0