We use cookies on this site to improve your user experience

A future Olympian in the making at E-ACT Parker Academy 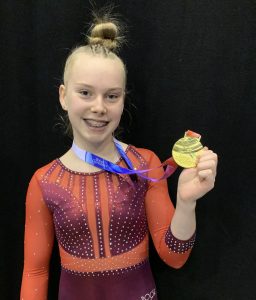 A Year 7 student at E-ACT Parker Academy, Pippa, has won a gold medal at the British Open Age Gymnastics championship.

Having persevered through the lack of training and competition becuase of the pandemic, Pippa did not let that stop her and was crowned British Champion in her age group.

Pippa started artistic gymnastics at the age of five before moving over to the tumbling discipline in May 2018. Her first major competition was in March 2019, where she finished second in the qualifier for the British championships. She then competed at the British championships in the 9-10 age category and despite performing with a dislocated finger, still managed to collect the silver medal, confirming her ranking as 2nd in the UK for her age. This performance saw Pippa selected for the GB Performance Pathway Development Squad.

Pippa recently competed in the National Women’s 11-12 age category and gained the gold medal. She has retained her spot on the GB squad and in 2022 will be competing at the European and world age championships!

A future Olympian in the making, Pippa regularly trains at Milton Keynes Gymnastics and is particularly grateful to her coaches and family for their support. In the future, Pippa wants to continue education within the sporting field and has aspirations to join Cirque du Soleil.

Once again, huge congratulations to Pippa!

The post A future Olympian in the making at E-ACT Parker Academy appeared first on E-ACT.

Good luck T! T is giving a talk at the allergy and free from show today. @ExCeLLondon. @Daventry6thForm @EducationEACT https://t.co/lzHfHxTe3o